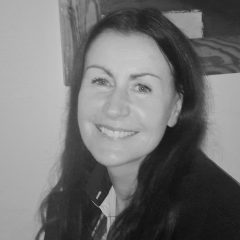 Berni is a native Irish speaker from the Gaeltacht of Gweedore in Donegal and although she is bilingual in Irish and English, it was out of love for the Irish language that she decided to pursue a career in Irish translation, which started in 2002 after completing a post-graduate diploma in Staidéar san Aistriúchán (Irish Translation Studies) at the National University of Ireland, Galway. A couple of years later she began to work as a freelance translator, covering topics such as EU affairs, legal, medical, technical, statutory instruments, annual financial reports, strategic company reports, school articles/posters/short stories and many more. She has been working with translation agencies for the past 12 years as a translator and reviser.

Berni began working with Translavic in early 2015 and has been working with them on translation projects and summaries of EU legal acts.

She spends half of the year living at home in Ireland and the other half in Egypt. Being able to work from wherever she likes is definitely one of the many perks that come with working as a freelance translator! Berni also enjoys reading, walking and of course travelling.