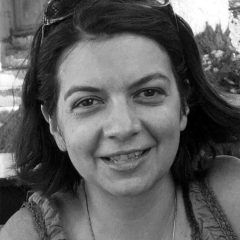 Nafsika started off as a freelance interpreter for the European Commission in Brussels, working from English, French and Spanish into Greek. When she moved to Athens, in addition to being an interpreter, she also translated EU texts in the above mentioned languages.

Now, many years later, she is an interpreter and an established translator. As an interpreter, apart from the EU, she has worked with various clients, from ministries and organisations to big corporations. As a translator, she collaborates with many translation agencies and private clients, specialising in EU affairs, law and marketing texts. She has translated thousands of pages in a wide range of often demanding projects.

Nafsika also teaches interpretation and translation in a postgraduate programme at an Athens-based college, in collaboration with the University of Strasbourg.